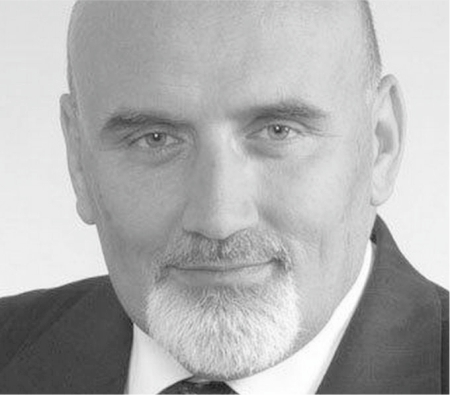 “Lesław Paga was one of the few people ahead of his time. And being ahead of time is when important tasks are taken upon while it might seem that there is no chance of accomplishing them or the odds are very slim. This way of commemoration of Lesław Paga is the best of all alternatives as this is an activity that serves to strengthen what Paga dealt himself and to strengthen the values that he treasured.”

Lesław Andrzej Paga was Born in Bytom in 1954. He was a scout instructor, initiator, and charismatic leader of many ventures and scout movement actions. He graduated from Maria Curie-Skłodowska University, where he also obtained a Ph.D. in Economics. In the years 1977-1984 he worked at the university as an assistant, subsequently an assistant professor at the Faculty of Economics.

Being a Solidarity activist and a delegate of the central-eastern region during the 1st National Gathering NSZZ „Solidarity” he served as a chairman of the proceedings. He was interned for union activities from December 1981 to May 1982.

In 1989 he started working as an advisor to the Minister of Finance and after that, he became a department director at the Ministry of Ownership Transformations. In the years 1991-1994, he was a co-founder and the first chairman of the Securities and Exchange Commission.

Since 1995 Lesław A. Paga was a chairman of the Council of the Polish Foundation for International Development Cooperation “Know-How”. Furthermore, he was a member of the council of the Andrzej Bączkowski Award granted for achievements in the field of public activities, social dialogue, and reforms in the field of social policy.

He was the president of the board of Deloitte & Touche Central Europe until 2002.
Lesław A. Paga died due to severe disease in 2003.

Lesław A. Paga was a specialist in the macroeconomy, ownership transformations, and capital market. He co-created the Polish Securities Trading Act, the Act on Bonds, and other securities trading acts of law. He specialized in managing enterprises, strategy, and restructuring. He conducted projects related to an enterprise strategic assessment, managing by values, investors’ relations, and investigations concerning financial crimes. One of the few Polish managers who took a regional management position in an international company.

Lesław A. Paga was an advisor to prime ministers. He fought for corporate governance, transparency, invitations to tender, and any business activity. He was a tough negotiator devoted to his mission. Notwithstanding difficulties, he always examined problems holistically, seeking the best solution.

Lesław A. Paga was a versatile person – having graduated from science studies, he also took a large interest in the humanistic field. He was fascinated with classical music, contemporary literature, and theatre. He was very fond of directing. He was an exceptionally energetic and creative man whose enthusiasm and positive attitude towards life influenced other people.

His surname, to this day, is synonymous with everlasting values in life and business, that is why the remembrance of his name lasts. One of the streets in Lublin, located close to the campus of Maria Curie-Skłodowska University, has been named after him.

In 2020, one of the auditoriums at UMCS was named after Lesław A. Paga.

In Lesław A. Paga’s honor, The Trading Room of the Warsaw Stock Exchange was also named after him.

On July 2, 2003, one of the founding fathers of the Polish capital market, Lesław Paga, dies, leaving behind a huge legacy of initiated projects, new management methods, and knowledge that he passes on to the next generation.

In the insistence of the business environment and many friends, after the death of Lesław A. Paga his wife Ewa Paga together with their daughter Paulina establish the Lesław A. Paga Foundation to continue his life’s work. Being a company where Lesław A. Paga was a CEO for 9 years Deloitte becomes one of the founders of the Foundation.

During this period and with Deloitte’s support, the Foundation begins its journey in the third sector environment and tries to adapt to the requirements and expectations of the market, evolving along with the development of the Polish market and economy.

The Foundation becomes a continuator of its Patron’s legacy, bringing together the business community and leading representatives of the capital market. It becomes a link between Academy and Business in times when higher education programs could not keep up with the dynamically changing labor market. The preparation of educational programs for university students and graduates starts, as well as for the students and teachers of secondary schools. The Foundation’s special offer contains internships in the best Polish companies.

December 10, 2003, is the date of the establishment of the Lesław A. Paga Foundation no. 2065. The Founders of the Foundation: Ewa Paga, Paulina Paga, and Deloitte & Touch Sp. z o.o.

2005 – the first Lesław A. Paga Award is posthumously presented to Krzysztof Lis, one of the main authors of economic transformations in Poland.

2006 – the project of the Capital Market Leaders Academy is created. It is the first complete educational project on the market in the form of a summer school for outstanding students of finance and accounting, aspiring to become top managers in international corporations.

2007 – Lesław A. Paga Award is presented to Leszek Balcerowicz for constancy to held principles and for the courage to speak difficult truths, for transparency of undertaken activities and their high ethical values during 17 years of public service.

2009 – The Foundation transfers the headquarters to Warsaw Stock Exchange at ul. Książęca 4.

After closing the first stage of the Foundation’s activity and changing headquarters, started a period of promoting the Foundation’s undertakings and the idea of academic education. During Polish economy expansion, Poland began to enter modern European politics for good, and Polish companies were searching for talented, young leaders, who could keep up with the blossoming economy and meet the requirements related to internationalization. That is why the following programs were created.

At this time Scholarship Holders of the Foundation have undoubtable occasion to learn from the best specialists and gain practical experience in over 200 partner companies during paid internships which are often followed by an offer of permanent employment. Especially for its Alumni, Foundation organizes private evening meetings with the greatest figures of the Polish market.

2010
Lesław A. Paga Award goes to Janusz Lewandowski for his exceptional effort for the benefit of Poland in the agenda of the European Union.

2012
Zygmunt Solorz-Żak is awarded the Lesław A. Paga Award for his contribution to the development of the Polish economy and the launch of the Academy of Energy program. Along with the establishment of TGE (Polish Power Exchange) and the growth of the Polish energy industry, comes the demand for talented, young personnel. The Foundation in cooperation with the energy industry potentates establishes a project which main goal is to look for outstandingly talented engineers and managers, equip them with necessary substantive knowledge, and improve their competencies through a series of workshops that are organized during weekend meetings.

2013
Fusion of Capital Market Education Foundation (Fundacja Edukacji Rynku Kapitałowego) and Lesław A. Paga Foundation no. 2065.
Getting the right to the organization of Online School Stock Market Game.
The 10th-anniversary celebration of the Foundation.
Foundation is awarded the PROJUVENS 2013 Award for its excellent cooperation with students in the category of non-governmental organizations.
Healthcare Leaders project initiation. Due to the dynamic growth of the healthcare industry and the necessity of its reform, Foundation introduces a project with the purpose of educating future personnel leading the market.
Lesław A. Paga Award goes to Marek Belka for his contribution to the capital market and strengthening the position of the National Bank of Poland and for decision making which he was guided solely by the public good and always displayed civil courage.

2014
Ewa Paga obtains the WEKTOR 2013 Award for passion and consistency in educational activities and the support of talented university students and graduates. Changing the name of the foundation to Lesław A. Paga Foundation.

2015
Lesław A. Paga Award goes to Hubert Wirth for consistency in business, the courage of decision making, taking risks and responsibility, as well as for his profound scientific contribution in the field of geology and investment processes.

Foundation’s community known as Pagowicze consists of over 2,000 talented, young people who have started to engage in the everyday life of their organization. Along with the dynamically changing market, generational change, and changes in the expectations of the employer, Foundation’s projects convert into regular programs carried out in recurrence.

2017
Zbigniew Jagiełło is granted Lesław A. Paga Award for engagement in the domestic economy development and promoting high operating standards of the financial market in Poland.

The fifth anniversary of the Healthcare Leaders program.
Establishment of the Business Women Leaders Academy – at the request of the Foundation’s Alumni and the decision of the Foundation’s team resulting from the observed need to strengthen women in self-realization and professional and personal self-awareness. The Foundation opens a project dealing with mentoring and development, whose goal is to create a new community for young women on the threshold of their career, where they will be able to find support among their peers and specialists.

2018
Signing a cooperation agreement with PROJECTOR – student volunteering – an organization with an aim to activate and counteract the exclusion of children and adolescents from small towns and villages all over Poland by developing their passions and interests, discovering their talents and potential of both stunts and project participants.

2019
The Foundation joins the Pro Bono Leaders (Koalicja Liderzy Pro Bono), an organization striving to show the benefits and opportunities that voluntary work gives to a person – an employee, manager, leader, and the whole company.

This year brings a completely new opening to the Foundation in the new reality. After the pandemic outbreak, the way the Foundation operates changes and many activities are shifted to the Internet. The Foundation transfers its headquarters and adapts the way programs are implemented. The Foundation’s rebranding is in progress, new mission and vision come to life.
New mission: to create a school of life for talented young people who have the courage and ambition to change the world for the better.

2020
The Foundation’s headquarters is moved to ul. Drawska 7 in Warsaw.
Jubilee, 15th edition of the ALRK Leader Academy.
Start of the Seniors 4.0 program – first project dedicated to people over the age of 65. As a part of cross-generational cooperation, Foundation’s Alumni share their knowledge with Seniors through workshops concerning health prophylaxis and personal financial security.
The V4+ Academy of Young Business Women Leaders, our international program starts in cooperation with International Visegrad Fund.
The development strategy of the Foundation for the years 2020-2023 is created in association with Bain&Company Poland.
New communication strategy and vision for the next 10 years.

The project is co-financed by the Governments of Czechia, Hungary, Poland and Slovakia through Visegrad Grants from International Visegrad Fund.
The mission of the fund is to advance ideas for sustainable regional cooperation in Central Europe.

We use cookies on our website to give you the most relevant experience by remembering your preferences and repeat visits. By clicking “Accept All”, you consent to the use of ALL the cookies. However, you may visit "Cookie Settings" to provide a controlled consent.
Privacy policyCookie SettingsAccept All
Manage consent

This website uses cookies to improve your experience while you navigate through the website. Out of these, the cookies that are categorized as necessary are stored on your browser as they are essential for the working of basic functionalities of the website. We also use third-party cookies that help us analyze and understand how you use this website. These cookies will be stored in your browser only with your consent. You also have the option to opt-out of these cookies. But opting out of some of these cookies may affect your browsing experience.
SAVE & ACCEPT
Skip to toolbar